The project “Climate Resilient Communities” was aiming to support 5 communities in Malawi to increase their resilience towards climate change by developing adaptation strategies to enhance the agricultural production and rural livelihood by making it more resilient towards climate extremes. The 5 communities (Midland, Khondodwe, Mpingu, Chileka und Msitu) are situated around Lilongwe, the capital of Malawi, in Malawi’s Central Region. The overall goal was divided into two sub-goals: (1) Development of climate resilient and food sovereign communities and (2) increasing the stability of ecosystems.

The project activities were conducted in several project phases (planning, workshops, evaluation and monitoring), in each phase the active participation of the community was essential. Main components of the project were two capacity building workshops YSD conducted together with each community. A strong focus was on connecting theory and practice, newly learned content should be directly trained in practice. During the project the communities should become “model communities“. These model communities should be representative for other community’s development towards climate resilience and spread their knowledge, experience and success that also other communities could benefit from the proposed activities and increase their climate resilience. 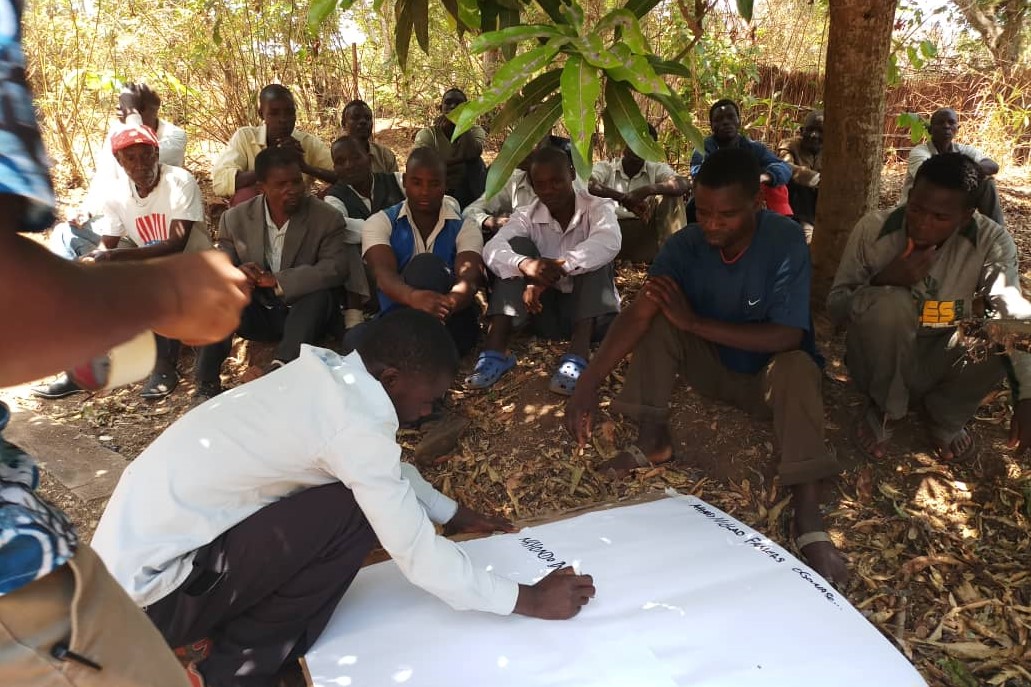 The first workshop phase was from November to December 2018. YSD conducted workshops on ecological farming practices in all 5 communities. How can we adapt our agricultural practices so that they are better adapted to unpredictable climate change? YSD proposed organic farming as alternative to the conventional agricultural practice. Environmental problems of conventional farming were addressed and the opportunities of organic farming for climate and environmental protection as well as for improved climate resilience and food security were explained. In the practical part, the needs of the communities were addressed individually and topics from sustainable water management, biological and integrated pest management and agroforestry to sustainable soil management with organic fertilization with compost were on the agenda. A special part of the training was the development of demonstration sites. On these educational sites the community members could first try out the newly learned techniques together with YSD and later adopt them in their own fields and gardens. The demonstration sites should avoid a knowledge-action gap and should increase the successful adoption. The farmers know from their experience on the demonstration field that the learned practices work and they don’t feel like they are taking an unknown risk by adopting it on their own property.
The farmers are often subsistence farmers and have little financial means. The workshops therefore presented low-cost methods or just specific knowledge about practices which don’t require any investments. The workshops were further an important opportunity for the farmer to network and share their knowledge, also their indigenous and traditional knowledge of agricultural practices. At the end of the trainings, the communities developed concrete action plans to implement the ecological farming practices. This action plan was followed by the communities and YSD evaluated the success and supported the communities in their implementation during their monitoring visits.

In the second workshop phase from January to February 2019 the topic was risk management. Climate change with increasing extreme events of droughts and floods is especially influencing agriculture. In Malawi, where 80% of the population are directly dependent on their own agricultural production, climate change has a strong influence on people’s livelihoods. In March 2019, cyclone Idai affected Malawi, especially in the South of the country flooding stroke many communities. In the project region in Central Malawi the storm destroyed some harvest because of heavy rainfalls and strong winds. Before the storm, in February, Malawi had experienced a dry spell of around 2-3 weeks which had already had a negative influence on the plants. This clearly shows the importance to be prepared for climate change induced extreme events. It is important for the communities to have concrete plans on how to support their families even when unexpected climate events occur and destroy the harvest. During the risk management workshops the participants discussed the threats climate change is bringing and how these have a negative impact on everyday life and agricultural production. The participants then developed risk strategy plans with concrete ideas to mitigate the possible damage. The plans were supposed to include as many risk management strategies as possible to be prepared for any expected or unexpected climate event and increase their adaptation capacity and resilience. Possible ideas were e.g. reforestation, contour ploughing, drought resistant crops and the formerly acquired methods of organic farming. Further, YSD pointed to the opportunity to use weather forecasting from public media like the radio to be warned in advance and get prepared. The risk strategy plans were successful, many participants in the communities were better prepared for the drought and the following extreme rainfall events because they grew drought resistant crops and were adopting methods of sustainable water management.

The success of the project was mainly due to the active participation of the communities. The farmers were included in every project phase (planning, implementation, evaluation) and therefore felt ownership for the project which led to higher engagement and motivation. This also led to an accepting and trusting relationship between YSD and the communities. YSD didn’t come with concrete solutions, the communities found their own individual solutions themselves. Integration of traditional knowledge as well as scientific insights was possible. The demonstration sites became important education centers and increased the acceptance and adoption of ecological farming practices in the communities. Despite all the success, YSD could still see some obstacles in the adoption of climate resilient practices, especially when financial resources are limited.
All in all, the project was successful. The implementation of ecological farming and risk management made the participants better prepared for the climate change related extreme events in the beginning of 2019. The farmers implemented their plans on the demonstration sites as well as in their own gardens – the goal of developing climate resilient and food sovereign communities was pushed forward successfully.